RuM is a desktop application that provides a comprehensive set of declarative process mining tools in a single unified package that is easy to use for both novices and experts of process mining. RuM is based on the process modeling language Declare but no prior experience with Declare is required to start using it.

The development of RuM has been partially supported by the Estonian Research Council (grant PRG887 and PRG1226). 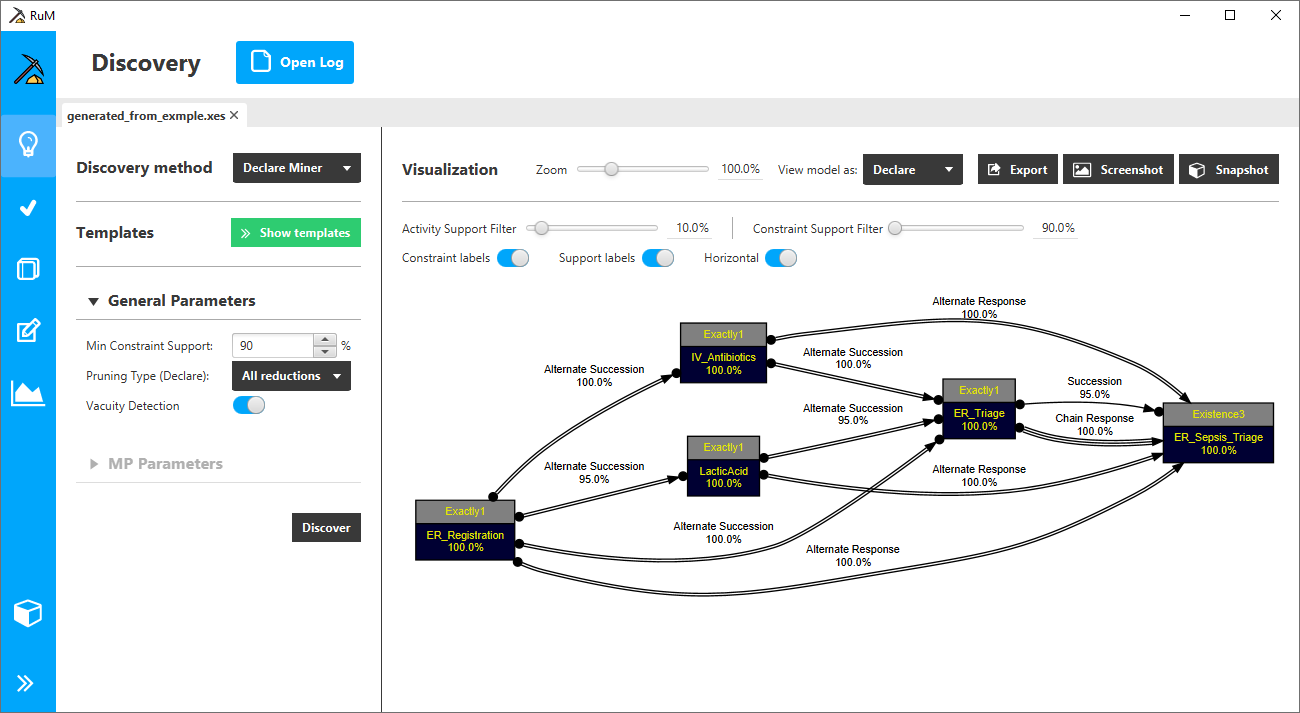 Process discovery supports the Declare Miner and MINERful techniques. The results can be explored using the Declare graphical notation, a textual description of the discovered constraints or a formal representation of the model as an automaton.

Conformance checking supports the Declare Analyzer and the Declare Replayer methods. The conformance can be explored either by trace or by constraint. 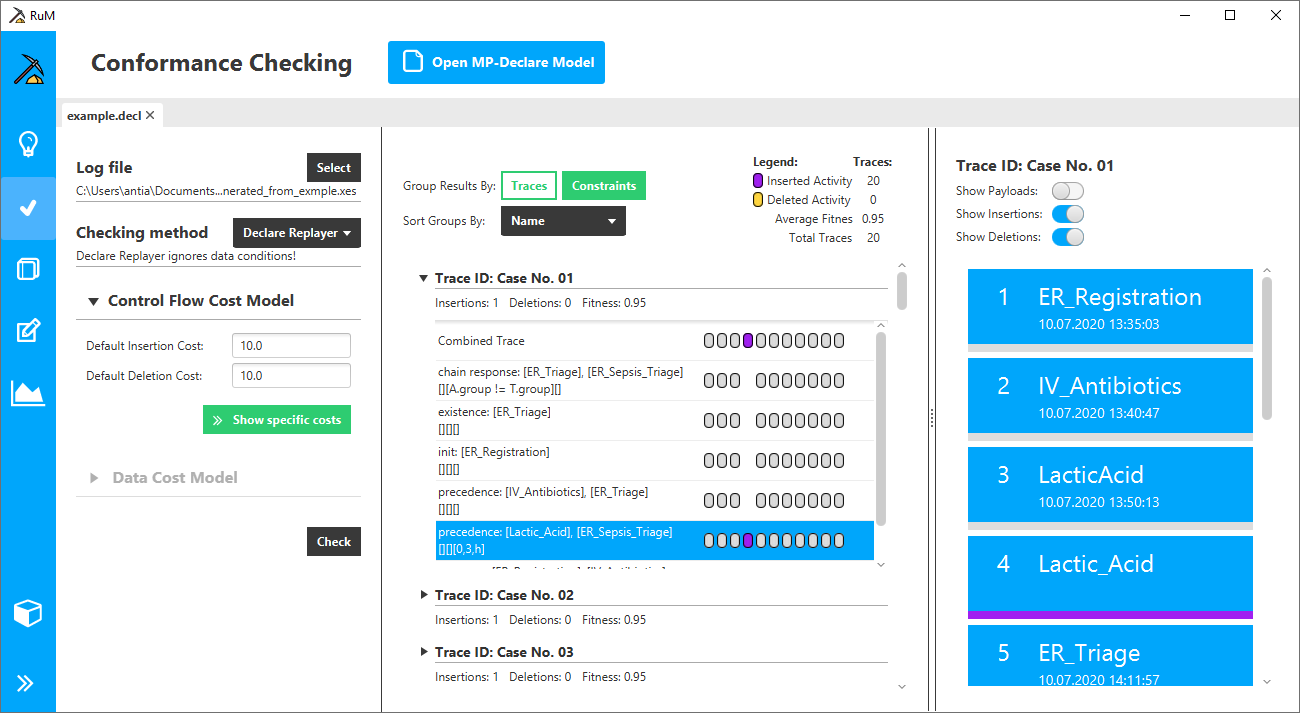 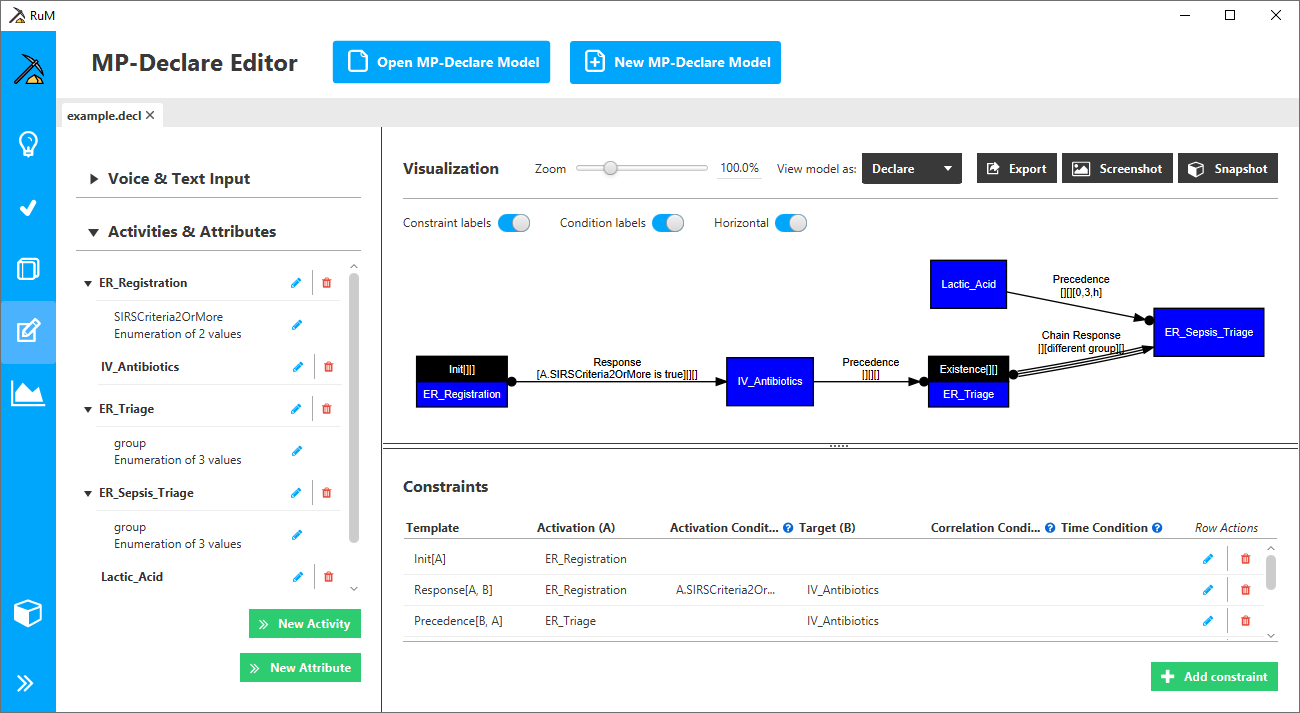 RuM includes a model editor to define Declare constraints – also with data and time conditions, as specified by the multi-perspective version of Declare (MP-Declare). 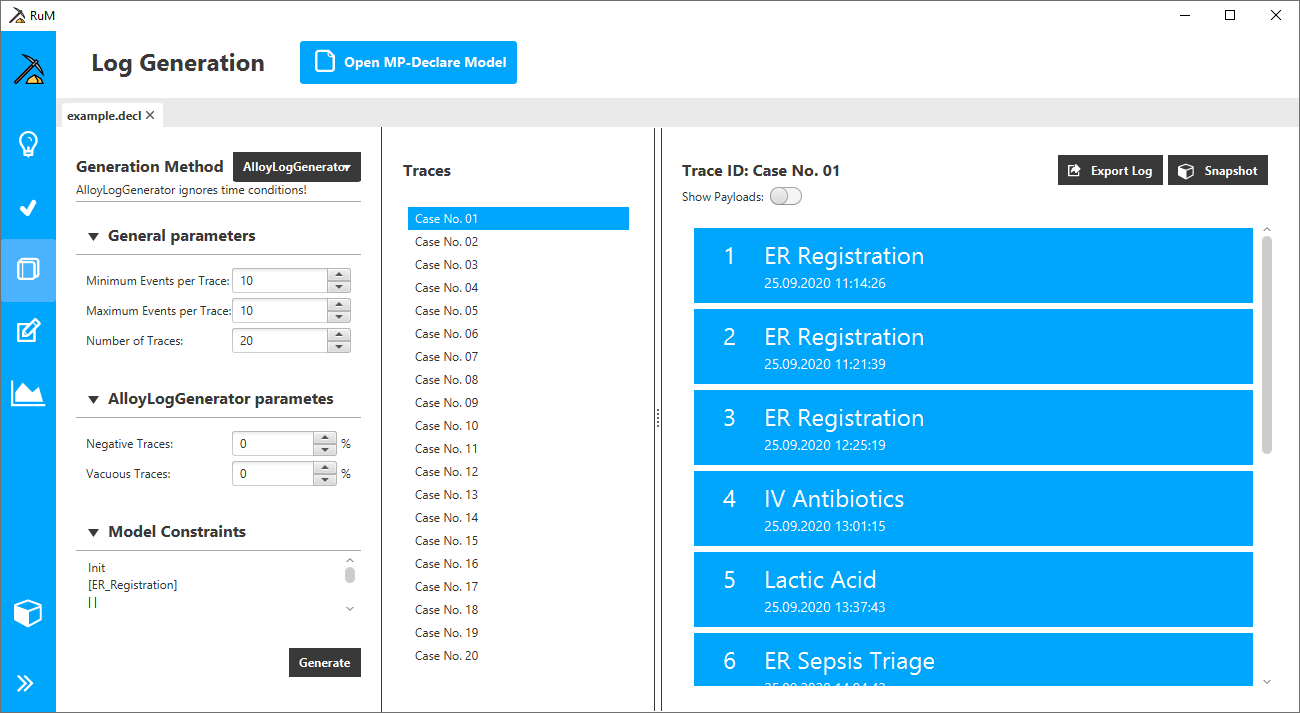 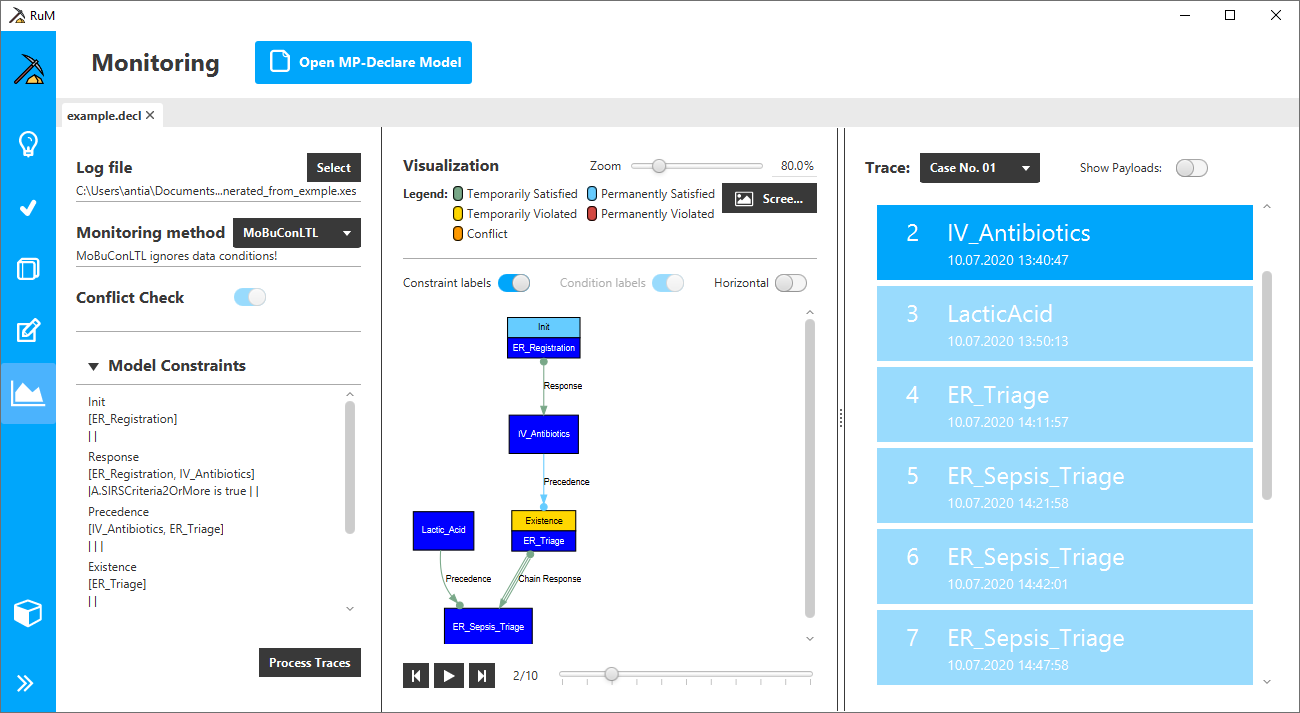 Monitoring supports the MP-Declare w Alloy and MobuconLTL methods. The monitors animate a Declare model by replaying a log over it and showing the constraints in the model that are temporarily or permanently satisfied or violated, after the occurrence of each event in the log.

RuM comes as a JAR package: no installation is needed! To run it, you only have to equip your machine with Java 11 JDK.

If there are other versions of Java on the same computer then it may be necessary to use the command: java -Djava.library.path=. -jar .\rum-0.5.12.jar

(You will be directed to owncloud.ut.ee for downloading)

The source code of RuM is available here

Abstract – Declarative process modeling languages are especially suitable to model loosely-structured, unpredictable business processes. One of the most prominent of these languages is Declare. The Declare language can be used for all process mining branches and a plethora of techniques have been implemented to support process mining with Declare. However, using these techniques can become cumbersome in practical situations where different techniques need to be combined for analysis. In addition, the use of Declare constraints in practice is often hampered by the difficulty of modeling them: the formal expression of Declare is difficult to understand for users without a background in temporal logics, whereas its graphical notation has been shown to be unintuitive. In this paper, we present RuM, a novel application for rule mining that addresses the abovementioned issues by integrating multiple Declare-based process mining methods into a single unified application. The process mining techniques provided in RuM strongly rely on the use of Declare models expressed in natural language, which has the potential of mitigating the barriers of the language bias. The application has been evaluated by conducting a qualitative user evaluation with eight process analysts.

Abstract – Procedural process modeling languages can be difficult to use for process mining in cases where the process recorded in the event log is unpredictable and has a high number of different branches and exceptions. In these cases, declarative process modeling languages such as DECLARE are more suitable. Declarative languages do not aim at modeling the end-to-end process step by step, but constrain the behavior of the process using rules thus allowing for more variability in the process model yet keeping it compact. Although there are several commercial and academic process mining tools available based on procedural models, there are currently no comparable tools for working with declarative models. In this paper, we present RuM, an accessible and easy-to-use rule mining toolkit integrating multiple DECLARE-based process mining methods into a single unified application. RuM implements process mining techniques based on Multi-Perspective DECLARE, namely the extension of DECLARE supporting data constraints together with controlflow constraints. In particular, RuM includes support for process discovery, conformance checking, log generation and monitoring as well as a model editor. The application has been evaluated by conducting a qualitative user evaluation with eight process analysts.

Abstract – Declarative, constraint-based approaches have been proposed to model loosely-structured business processes, mediating between support and flexibility. A notable example is the Declare framework, equipped with a graphical declarative language whose semantics can be characterized with several logic-based formalisms. Up to now, the main problem hampering the use of Declare constraints in practice has been the difficulty of modeling them: Declare’s formal notation is difficult to understand for users without a background in temporal logic, whereas its graphical notation has been shown to be unintuitive. Therefore, in this work, we present and evaluate an analysis toolkit that aims at bypassing this issue by providing users with the possibility to model Declare constraints using their own way of expressing them. The toolkit contains a Declare modeler equipped with a speech recognition mechanism. It takes as input a vocal statement from the user and converts it into the closest (set of) Declare constraint(s). The constraints that can be modeled with the tool cover the entire Multi-Perspective extension of Declare(MP-Declare), which complements control-flow constraints with data and temporal perspectives. Although we focus on Declare, the work presented in this paper represents the first attempt to test the feasibility of speech recognition in business process modeling as a whole.

Abstract – Proposed approaches for modeling knowledge-intensive processes include declarative, constraint-based solutions, which meet halfway between support and flexibility. A noteworthy example is the Declare framework, which is equipped with a graphical declarative language whose semantics can be expressed with multiple logic-based formalisms. So far, the practical use of Declare constraints has been mostly hampered by the difficulty of modeling them: the formal notation of Declare represents a steep learning curve for users lacking an understanding of temporal logic, while the graphical notation has proven to be unintuitive. This work presents Declo, a chatbot that allows users to easily define declarative constraints using natural language statements provided in the form of vocal or textual input. The supported constraints cover the entire Multi-Perspective extension of Declare (MP-Declare), complementing control-flow constraints with data and temporal perspectives.